A tragic end to what was supposed to be an exciting stunt — after a father miscalculated his cliff jump — leading to his death as his family watched in horror.

The video is tough to watch, you see the man take a leap from the 100-foot cliff in Spain. Clearly, he knows something is wrong quickly, letting out a scream before clipping the jagged rock and hitting the water … you hear the woman recording yell, “Oh my God!” 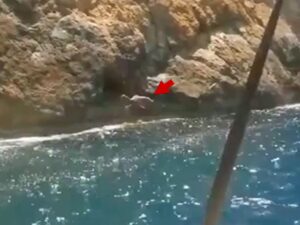 According to the Majorca Daily Bulletin, the woman recording was the man’s wife — his son was also present — and they had rented a boat for the day to tour the rocks on one of the Malgrats Isles by Santa Ponsa.

The report says authorities were called to the scene shortly after the accident, and they were able to locate the man’s body.

It’s unclear who the man was or if he was visiting the area on vacation.