A wild goose named Arnold, who lives on a pond nearby was seen having trouble walking, apparently due to a hurt foot. The staff decided to admit the bird into their wildlife hospital for treatment.

But they weren’t the only ones concerned about Arnold’s wellbeing.

An examination found that Arnold’s foot was indeed injured and would require surgery to fix. His sudden absence from the pond, however, didn’t go unnoticed.

Arnold, it turns out, has a girlfriend — a lifelong mate who’s been with him for years. And she wasn’t about to deny him her moral support in his time of greatest need. 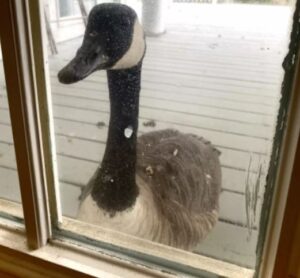 “As we prepared to sedate Arnold and got him ready for surgery, we heard a faint tapping at the clinic door,” staff at the centre wrote. “We turned to see that his mate had waddled up onto the porch and attempted to break into our clinic! She had somehow located him …”

Fortunately, the surgery on Arnold’s foot was a success. His girlfriend demanded nothing less.

“She remained there throughout the entire procedure, watching us work, never moving from the doorway,” staff wrote.

Afterwards, they placed Arnold near the door and opened it so the two geese could be together.

“They both seemed much more at ease in each other’s presence,” staff wrote.