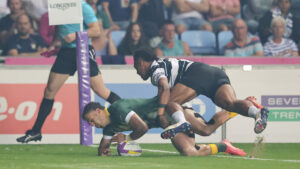 Fiji Men’s 7s coach Ben Gollings says South Africa did a really good job of not allowing Fiji to play and they took their opportunities.

While speaking after the 31-7 Commonwealth 7s gold final loss against South Africa, Gollings says they came up against a very good South African team.

South Africa were far superior in the breakdown area and took advantage of the lack of support play by Fiji.

After winning the silver medal, the focus for the Fiji men’s team will shift to the LA 7s which will be held from the 28th of this month before the 7s World Cup in September in South Africa.