Mat weaving is a skill that we don’t come by as easy as we used to, but that doesn’t mean that the love of mats and the appreciation for their beauty and the work that’s put into weaving them is lost.

A couple of days ago, Unise Coriakula shared a very special moment in her life with the world in a Facebook post – she had finally finished weaving her first mat.

Unise, or Laura as she’s known to her family and friends, wrote in the Facebook post about how she didn’t get the chance to sit around with her aunties to learn the traditional crafts of weaving mats and decorating mats with kula since she was born and raised in Melbourne, Australia.

That, however, didn’t stop her from hassling her father for an old i cconi to practice on resulting in her father finally giving her an old vakabati that showed evidence of moths eating its wool. The voivoi was also breaking apart so her work was cut out for her.

She pulled out the old kula and restored the patches in the old mat. 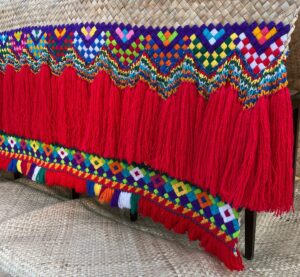 Day and night she sat with her father while he recalled his mother’s techniques and unique pattern work until the day she was finally able to say that she had successfully completed her first mat.

She may have just encouraged many young Fijians to actually make an effort to learn the craft if they haven’t already.

For more of Unise’s work, check our her and her Father’s Facebook page, Meke Movements.