Well, today was eventful as hell and with everything that’s happening in the world, our heads all turned towards a particular altercation that in simple terms ROCKed everyone.

Will Smith and Chris Rock will be the talk of the town for quite some time and it’s pretty clear that both parties did go hard at the Oscars this year.

Rock took to the stage to present the award for Best Documentary and took then took a jab at Jada Pinkett Smith being in “G.I. Jane” because of her shaved head.

Smith then took the stage to slap Rock. 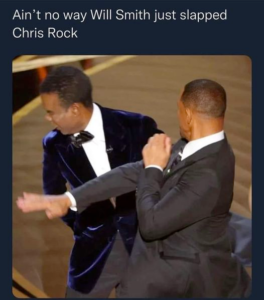 Although it appeared to be a joke at first, Smith returned to his seat and yelled at Rock, “Keep my wife’s name out of your

Many in the Oscars audience appeared stunned at the altercation.

Pinkett Smith – who announced last year that she shaved her head after struggling with alopecia – could be seen in the audience together with her husband, rolling her eyes at the joke.

Everyone is torn in two after this whole situation with one half saying that Will was the right to defend his wife, the second party are pretty vocal saying it was a joke and Smith was being unprofessional.