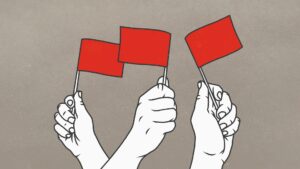 If you haven’t already noticed then I guess you’re one of the lucky ones, but just in case you’re curious enough to find out what I’m talking about, I’ll just make it easier for you and tell you right now.

If you don’t know what exactly a red flag is, I suggest you just skip reading this altogether.

There is a viral trend going on right now where you point out certain characteristics in a person that can and should be considered a red flag. The trend is done by just writing down what you think is a red flag followed by several red flag emojis and that’s pretty much it.

I’ve been having a great time just reading through some of the red flag posts on Twitter and Facebook and I hope this trend doesn’t die down anytime soon, because it is amazing!!

The trend started off on Twitter with Team Fiji on Twitter jumping on the trend faster than anything and not long after that, it found its way to Facebook.

If he a Fijian Man and can’t do the sevusevu

There have been so many more posts and tweets about it and some of them can get really personal, but knowing how nosy we can be sometimes, it just adds to the entertainment value of some of the red flag posts.

If you wanna share some of your red flag moments with us, leave them in the comments section 🙂