When Pop power couple Shawn Mendes and Camilla Cabello first got together in September 2019, fans were excited and many had hopes for a fairytale ending. 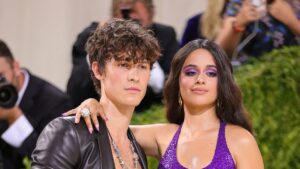 However, that wasn’t to be and they broke up in November after months keeping his mouth shut about the whole situation he talked about his recently released”It’ll Be Okay”  and his situation after the breakup and having to come to terms with it.

He says in the aftermath of the breakup he was wondering who he could turn to.
“Like, who do I call when I’m like, in a panic attack? Who do I call when I’m like, on the edge?” he said. “I think that’s the reality that kind of hit me – it’s like, ‘Oh, I’m on my own now.’ Now I feel like finally, like, I’m actually on my own, and I hate that. That’s my reality, you know?”
Cabello told Apple Music earlier this month that she still has love for Mendes.
“I love Shawn and I feel like there is literally nothing but love for him,” she said.  Guess that’s the end of a fairytale.