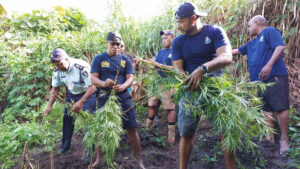 A team from the Police Special Response Unit who are currently in Kadavu were joined by Commissioner Brigadier-General Sitiveni Qiliho as plants believed to be marijuana from 8 farms located along the borders of Nauciwai and Gasele villages were identified and uprooted.

The team was deployed last week to follow up on the logistical and administrative support during the ongoing drug raids in Kadavu.

Qiliho also witnessed the destruction marijuana plants that were seized last week after Police Prosecution were able to obtain 7 court orders for the plants to be destroyed.