A journey from the west to the capital city will often leave you bored with the wide and far patches of open road and at times to pass the time you may find yourself striking up a conversation with an interesting stranger in the bus. Now in this particular case , travelling from Lautoka to Suva I glimpsed a familiar face in an old gentleman who usually stands in front of BBQ Chicken in Lautoka with his collection tin of coins trying to raise a bit of money for the impoverished youths of his area. Would pass him from time to time and drop a few coins when I could manage it but in the back of my mind I had always wondered what his story was.

Upon first glance, his small frame and calm demeanor would probably warrant just a short look and a move on but being a curious person myself, I decide to go over and strike up a conversation with him. Turns out the man I was talking to was Shiri Chand, better known in marathon circles as “Mushroom”. When I asked him whether that was a nickname from his running days ; he simply replied with a toothy grin “Segai!” , going on to say that as a boy he used to sell mushrooms to help out with finances at home and the name just stuck. 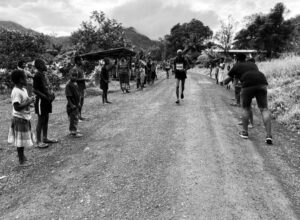 On the long and often uneventful stretch of road between Sigatoka and Suva he proudly told me stories of being the first Fijian of Indian descent to win a medal in a long distance event and winning a silver medal; beating a New Caledonian on home soil in SPG Suva back in 1979 only made it all the more sweeter. He also went on two win more medals in the two subsequent South Pacific Games , bronze medals in Apia and Noumea in 1983 and 1987 respectively. All these achievements culminated in him winning Fiji Sportsman Of The Year Award in 1989

At 71 years of age he still continues to jog daily to stay fit and attributes his longevity to a healthy lifestyle. He still competes in marathons ,completing the 5000 meters Masters event of the Namosi Marathon in 2020. These days he makes a difference by helping raise funds for unfortunate kids and on most days you’ll be able to find him and his tin of coins based in front of BBQ Chicken and he invites anyone to stop and have a chat even if they don’t have much to give.

The moral of the story, you ask? Don’t be shy to turn your eyes away from your phone screens every once in awhile and take notice of your neighbor , you never know who you just might be sitting next to.

Vatuwaqa Primary School up in Flames This Morning