Now when you think about the most loyal employee in the world , you think about someone who comes to work early every day or gets ‘Employee of the Month’ every other month and while I’m pretty sure many could vie for for this title, only one man could put all contenders outta the race and that man is Walter Othmann.

Walter Orthmann, a 100-year-old man from Brazil has been working for the same company since 1938, which officially makes his career worthy of the Guinness Book of Records and being given the title “Longest Career In The Same Company” Working for Industrias Renaux S.A., a textile company in Brusque, since January 17, 1938, when he was only 15-years-old. He began as an assistant in the shipping department, but over the years, he was promoted to administrative assistant and, eventually, sales manager. 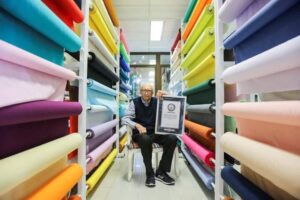 When asked about how he lasted so long in his career, all he had to say was :

“Don’t be angry, do everything laughing. Just do what you like to do. I like working here at the company. Don’t have enemies. Apologize. Live calmly. Life is just a passage here on Earth, enjoy it, do what you want.”

During his 84-year-long career, Walter went on sales trips all over the world, received his paycheck in nine different currency denominations, and used nearly every commercial airline in the history of Brazilian aviation.