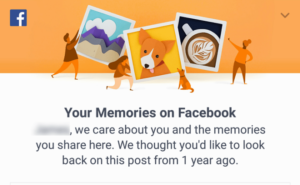 Do you sometimes just ignore your Facebook memories on purpose because you already know what’s in store for you?

That’s basically me on a daily basis.

The number of times that I’ve cringed at my old posts and pictures is pretty unhealthy, but I have no doubt in my mind that a lot of my friends on Facebook go through the very same thing when they’re going through their Facebook memories.

Sometimes, I feel like, at this point, Mark Zuckerberg is just pulling our legs by introducing “Facebook memories” to the world, but all in all, it’s a fun addition and I guess it’s a daily reminder that having social media in the 2000s and early 2010s was probably not the best thing since sliced bread.