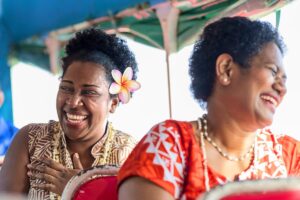 I feel like one day, I’m going to be “one of those aunties” but right now, I’m still playing the role of “Cousin who never shows up” so let’s just focus on the aunties now.

Hate them or love them, aunties are the ones who usually make family functions memorable, whether it’s for good or bad, that depends on what type of aunty they are.

Check out the list of types of aunties below:

This is the one that’s usually very young at heart. She knows all the cool songs, slangs, and will probably let you do things that your parents wouldn’t allow you to do, because she’s more of a friend than a figure in authority. Sometimes, you lowkey wish she was your mum.

THE AUNTY THAT GOSSIPS

Well, if your family doesn’t have at least one aunty like this, then you’re lying lmao This aunty knows anything and everything under the sun about everyone under the sun. If there’s somebody that knows how to dig up dirt about a certain family member, you can trust this aunty to get the info asap.

This is more of a blanket description of the type of aunty that I’m actually talking about. An uptight aunty would be the one who has to be involved in everything. It’s usually the aunty that has a problem with how you dress, how you wear your hair, and why you have so many tattoos. You’re actually glad this one is not your mum, but you know you can count on her to put a disrespectful person in their place when the need arises.

This woman has the most kids out of all the mums in the family and she’s still having more. She loves the kids and talks to everyone in a very calm and kind manner. She’s probably got a few kids that are teenagers and some that are still babies, so when it comes to finding the right aunty to look after the kids at the family get-togethers, she’s usually the first one you call.

The centre of almost every family drama, this aunty really knows how to draw attention to herself for all the wrong (or right, depending on how you see it) reasons. This is the aunty that you have to tell people to hide their husbands from. Family members can usually be found warning non-family members about this aunty’s promiscuity, but it’s really up to them how they wanna treat her.

If you know that you have at least one of these aunties in your family, let us know in the comments.