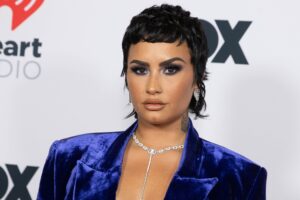 Where do I start with this?

First of all, let me just put it out there that Demi has been making news for all the wrong reasons and at this point, we don’t know whether her antics are a cry for help or if she is just trying to pull a fast one on her fans.

In her first incident, she accused an ice cream shop of being fatphobic because they were selling sugar-free products. Why she thought that I will never know and I don’t know if I even want to know, but she lost that argument faster than when she started it.

Her second incident involved her claiming that she would love to have intimate relationships with aliens. I don’t think either of us deserves the trauma that story holds, so we’ll just move on to her third and most recent incident.

According to her, she had given an audience that consisted solely of ghosts and that they had given her a standing ovation after her performance.

Look, I’m into paranormal stuff as much as the next guy, but I’m curious to find out whether this was real or not.

What do you think of all this, though? Is this an obvious cry for help or attention? Or both?

Residents say they have lost hope after continued water disruptions

Cannabis Pizza in Thailand Goes Viral, but it Won’t Get You High

Things Millennials Grew Up With That Gen Z Wouldn’t Recognize