A mass shooting in Buffalo is being investigated as a hate crime after a man is alleged to have gunned down at least 10 people in cold blood … all of which was live-streamed.

18-year-old Payton Gendron was taken into custody Saturday and is now being questioned by the FBI … this after he allegedly went on a shooting rampage at a Tops Friendly Market grocery store with what appears to be a semi-automatic weapon, leaving nearly a dozen people dead, most of whom were Black — according to authorities in the area. 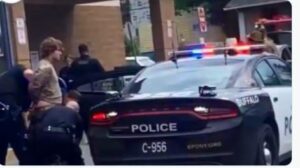 Other screenshots show what was going on inside … allegedly depicting the gunman going around and firing on people at close range. His Twitch page was active during this, and it appears people were in fact tuning in and maybe even commenting as it unfolded.
Buffalo’s mayor, Byron Brown, called it an “unimaginable nightmare” … and the Erie County Sheriff John Garcia was even more forceful — calling the onslaught “pure evil” and a “straight-up racially motivated hate crime.” All city and county leaders strongly disavowed the violence and sent thoughts and prayers to the victims’ families.