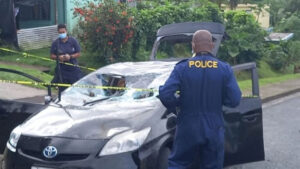 A 20-year-old man will be produced in the Suva Magistrates Court this afternoon charged for his alleged involvement in the Raiwai brawl on Sunday.

2 men have already been produced in court and remanded for their alleged involvement in the violent attack.

They are jointly charged with one count of malicious act and have been separately charged with a count each of serious assault and breach of bail condition.

One of them has also been charged with another count of criminal intimidation.