As a loved one passes away, we like to always remember them by visiting their grave, sharing happy moments and just letting them know that they are always remembered .

Now what if you’ve been visiting the wrong grave and sharing personal stories with a complete stranger !

It doesn’t sound like much of a big deal… but visiting a grave for over 40 years , NOW THA’S A BIG DEAL!!

A family has been left shocked and devastated after they discovered they were visiting the wrong grave, belonging to Fredrick Brown.

Sylvia Ross, 67, buried her father John Thompson in 1979 & has been regularly visiting the grave what she believed to be her father’s for over 40 years. 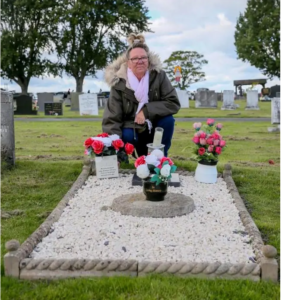 Her father was in fact lying in an unmarked grave just yards away.

I never met my grandad, but my mam has been visiting his grave for 43 years and is utterly devastated. She’s heartbroken as she says her dad has laid there thinking not one of us cared about him, with no flowers and no visits, nothing

The family only discovered the mistake from a Facebook post about a wrongly placed plaque at the cemetery.

It was then confirmed Sylvia and her family had been paying their respects at the wrong grave.

Imagine celebrating your dads birthday , sharing tears of joy & celebrating victories at a strangers grave ….. I don’t know about everyone else but I would be so interested in seeing Fredricks corpses confused look!! Doesn’t sound creepy AT ALL….