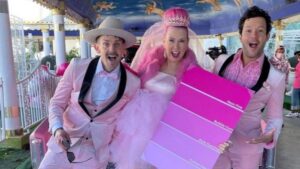 I’ve heard of people marrying inanimate objects like washing machines and brooms and whatnot, but I’ve never heard of a woman actually marrying a color!

Apparently, Kitten Kay Sera, who was known as the pinkiest person alive, has done just that.

She had made headlines a couple of years ago for spending almost $3 million FJD on making her house as pink as possible.

Her obsession with the color has gone a step or two forward with her officially marrying the color Pink in a ceremony that was attended by her close family and friends.

When Family and Friends only Message You When They Want Something

A Big Crime against Pikachu for no Reason

Will it be Bua or Yasawa in the Final

Rihanna becomes youngest Self Made Billionaire