The Netflix hit TV show Wednesday is the world’s most recent obsession. The show is based on the movie franchise, The Addams Family that became popular in the 1990s.

Unfortunately, not everyone has approved of a tattoo enthusiast’s latest body art, which features the morbidly inclined kid. Some people think it looks more like Samuel L. Jackson than 20-year-old Ortega. 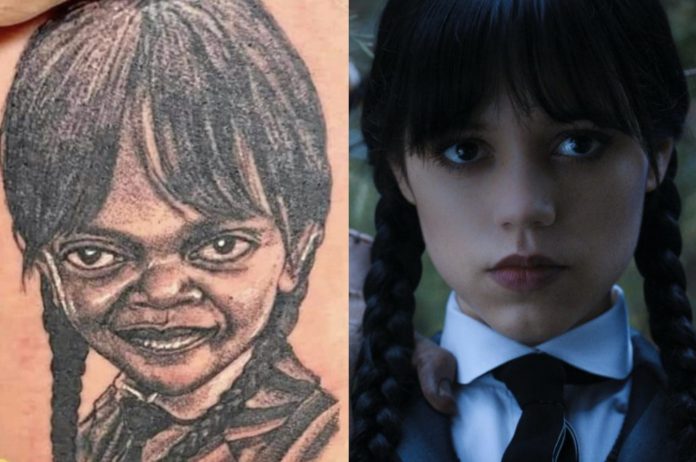 Laughing Twitter user @TheeSocialitee tweeted, “The client asked for Wednesday but instead got Saturday night at the after-hours,” after posting the image.

Since then, the tweet has gained a lot of attention, with some claiming that the body art most closely resembles the cursed character Gollum from the Lord of the Rings series. Additionally, comparisons were made to a “voodoo doll,” “ET with a wig on,” and the demonic horror movie doll Annabel.

“I suppose this is Monday morning and not Wednesday,” one amused person jokingly said.

“This is clearly a Monday morning after a wild Sunday night out,” another person concurred.

It’s likely this won’t be the final Wednesday-inspired plan asked in tattoo parlours this year. The powerful comedy frightfulness arrangement has demonstrated to be a crushing hit, rising as the second-most observed English-language Netflix arrangement fair three weeks after it was discharged back in November.