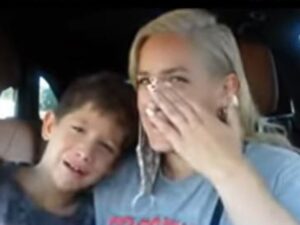 Social media influencers these days do the weirdest things for views, but this one seems to take the cake when it comes to “How messed up can social media get?”

Vlogger, Jordan Cheyenne, was caught in her lies when she uploaded a video of her trying to force her son to cry harder while she was recording them dropping their dog off at the vet.

The son is obviously already distraught, but it’s not enough for Jordan who can be seen and heard constantly telling the son how to cry and what kind of face to make while he’s crying.

The video was accidentally uploaded by Jordan who just forgot to edit out the parts where she was trying to mooch off of the son’s emotions and honestly, I’m happy she exposed herself so that her followers and subscribers will be able to see what goes on behind the scenes and before the cuts when she’s uploading videos.

You can check out the video below, but let us know what you think about it in the comments.

so this youtuber and her son had a puppy that passed away and she forgot to edit out the clips of her forcing him to cry more for her video thumbnail so she could get more views 😭 the world has lost it pic.twitter.com/EHvFlKM8tW

She’s since deleted all of her social media accounts since the incident, especially after the apology video that she had uploaded afterward did not go down as well as she thought it would.