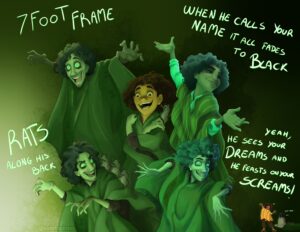 “We Don’t Talk About Bruno,” the record-setting hit from Disney’s Encanto soundtrack, is cantering to a fourth consecutive week at No. 1 in the U.K.

“Bruno” made history as the first original cut from a Disney film to lead the chart, and, last Friday, led a charge of three simultaneous Encanto tracks in the U.K. Top 10, something an animated film has never done before.

Based on sales and streaming data accumulated from the first 48 hours in the chart week, “Bruno” will lock up another chart crown.

Meanwhile, British rappers ArrDee and Aitch are ready to battle as “War” starts out at No. 3 on the First Look chart. It’s on track for the week’s highest debut, and if it holds its momentum, it’ll give ArrDee a fourth appearance in the top tier and Aitch his sixth.

Liam Gallagher could scoop his first U.K. Top 10 solo single later this week, with a little help from Dave Grohl. Gallagher, the former Oasis frontman, enjoys a hot start with “Everything’s Electric,” lifted from his upcoming album C’mon You Know.

Further down the list, Nicki Minaj is charging to a Top 20 debut with her latest release, “Do We Have A Problem?” featuring Lil Baby. It’s on course for a No. 16 debut, which would give Minaj the 39th U.K. Top 40 appearance, and Lil Baby his seventh.

Just one place behind on the First Look chart is Canadian pop singer Tate McRae, who returns with “She’s All I Wanna.” The Greg Kurstin-produced record is on track for a No. 17 debut, which would give McRae her second Top 20 appearance after her breakthrough 2020 number “You Broke Me First” cracked the Top 10.