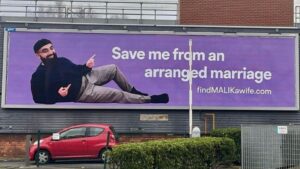 There are plenty of ways to find a romantic partner.

Some people like to take the old-fashioned approach by putting themselves out there and meeting new people while others like to do it from the comfort of their homes while they’re scrolling through their different social media platforms.

Then you have the ones that like to try unorthodox ways like putting their picture and contact information on a billboard while stating what their intentions are.

I wish I was making this up, but I’m really not.

29-year-old Muhammed Malik had multiple billboards put up in Birmingham, England, area with the phrase, “Save me from an arranged marriage” on it with a link to his website that women can go to if they are interested.

This idea stemmed from a joke that his friend made to him by telling him that he should try advertising himself since he wasn’t doing well on dating apps.

“I just haven’t found the right girl yet. It’s tough out here. I had to get a billboard to be seen”

Malik also mentioned that his ideal girl would be someone in their 20s who shares his Muslim faith.

“I’m open to any ethnicity, but I’ve got a loud Punjabi family — so you’d need to keep with the bants.”

He also wanted to clarify that despite what it says, Muhammed is not against arranged marriages between two consenting adults, but he would just rather try and find someone his own way before anything else happens to his marital status.

Imagine if someone here in Fiji did that. Do you think he’ll be getting a lot of responses?

When Family and Friends only Message You When They Want Something

A Big Crime against Pikachu for no Reason

Will it be Bua or Yasawa in the Final

Rihanna becomes youngest Self Made Billionaire