At Christmas homes up and down the country are adorned in twinkling lights, with Christmas trees put up and hung with baubles, and the halls are well and truly decked.

Some people opt for Nutcrackers and Snowmen figures to decorate their space, but others might prefer something a little different, like a gonk.

For those new to the world of gonks, the Christmas version of the novelty toy, features frizzy hair and a beard, with a knitted hat and is sometimes considered to be the Nordic version of Santa Claus.

One mum has admitted to being “obsessed” with gonks, so much so that she has spent £500 on a collection of them which now fills nearly every corner of her home. 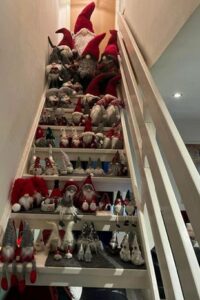 Susan describes the gonks as “peaceful little things” which she finds calming as they don’t have a face that’s looking at you.

The mum, who has been branded a “crazy gonk lady” by her daughter, initially started collecting small gonks but soon added larger ones to her family – including a 3ft ceramic one she’s called Chris who sits in her kitchen.

This year alone she has added 30 new gonks to her collection and she now has so many that she has no room to put up an actual Christmas tree. 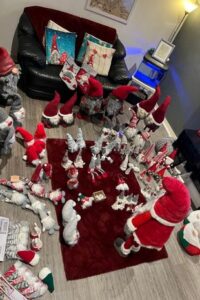