In the video, a dark-haired woman struts in a silver dress as the hills behind her burn. Her caption reads: “Fire erupts wherever I am.” Now, she’s one of several Pakistani TikTokers accused of purposefully starting fires to create dramatic backgrounds for their videos.

“She should have been holding a bucket of water to extinguish the fire instead of glamorizing it,” Rina Saeed Khan Satti, an environmental activist and chairperson of the Islamabad Wildlife Management Board, said according to Al-Jazeera. “The message these videos are sending is too risky and it needs to be contained.” 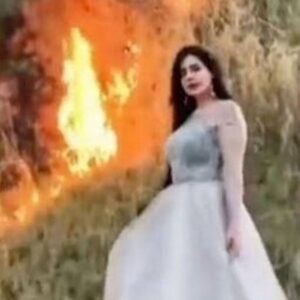 The TikToker in the silver dress — @DollyOfficiall or Nosheen Syed — has over 11 million followers on TikTok. She’s accused of purposefully starting a fire in the Margalla Hills National Park in violation of the country’s environmental protection laws, charges that Syed has denied. 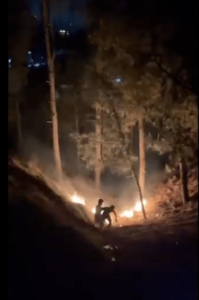 According to Al-Jazeera, Syed claims that she did not start the fire. Her assistant told the publication that there was “no harm in making videos.” But Syed is just one of several TikTokers in Pakistan accused of starting fires to put on their social media pages.