It’s hard to believe that a humble stamp could be considered exorbitantly expensive, but at $8.5 million, this 1856 postage stamp is considered the world’s most expensive object by weight.

The world is full of valuable objects, from jewelry to rare artworks, but when it comes to value per gram, nothing even comes close to…

a one-of-a-kind postage stamp that weighs just 40 milligrams but is valued at around $8.5 million.

To put that into perspective, the average 0.2-carat diamond (which also weighs 40 milligrams) costs about $700, while the same amount of LSD costs around $5,000.

There just isn’t an object that can compare to this ultra-rare stamp in terms of value per weight. 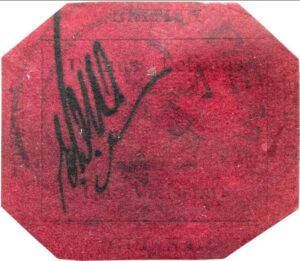 But what makes The British Guiana One-Cent Black on Magenta stamp so expensive? Well, it’s basically the holy grail of stamp collectors the world over.

It is probably the most well-known and coveted postage stamp in existence simply because it is the only one of its kind.

While most collectable stamps have multiple copies in circulation, this particular stamp is the only specimen.

Interestingly, The British Guiana One-Cent Black on Magenta isn’t even a real stamp.

In 1856, a local news office in British Guiana printed a number of pieces of paper adorned with an image of a three-masted ship and the colony’s motto, ‘We give and expect in return,’ to temporarily replace a batch of postage stamps the postmaster considered counterfeit.

These replacement stamps were taken out of circulation in just a few weeks, after a new batch of actual stamps was brought in, but 17 years later, in 1873, a 12-year-old boy found one among his uncle’s letters and sold it to a local stamp collector.

Fast forward 150 years and that little piece of magenta paper is the world’s most valuable object by weight.

The British Guiana One-Cent Black on Magenta passed through the hands of 9 owners until June of 2021, when it was bought by a company called Stanley Gibbons.

Now, however, the world’s most valuable stamp has hundreds, maybe thousands of owners…