We’re all guilty of making reckless decisions. Sometimes under the influence, other times, completely level-headed and sane. Either way, those decisions can be justified and make for lasting memories.

However, how does one explain snagging copious amounts of chewing gum? Where’s the logic in that? 18-year-old, Keon Sanderson and his partner, Ellis Benecke may have the answer for that.

The duo raided a delivery truck as the driver slept in the front. The driver was completely oblivious to the action and did not realise it until she had awoken. 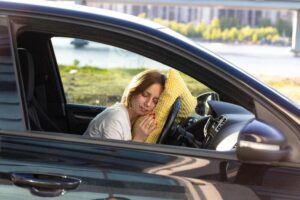 They proceeded to take out seven of nineteen pallets after cutting the side open in a sophisticated operation. They then attempted to flee the site after a nearby driver spotted them and contacted the local authorities.

The pair then got into what they thought was their getaway car and drove in the wrong direction of the main highway and bumped into their BMW which was intended for the escape. That then attracted even more attention. The young pair were taken into custody and when questioned as to what the motive behind the whole charade, Sanderson answered “I just needed to pay off some debt.”

They now both serve time for the damages caused.