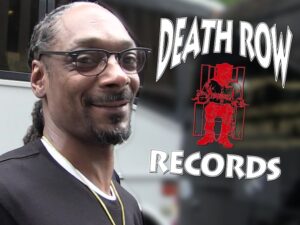 I am thrilled and appreciative of the opportunity to acquire the iconic and culturally significant Death Row Records brand, which has immense untapped future value. t feels good to have ownership of the label I was part of at the beginning of my career and as one of the founding members. This is an extremely meaningful moment for me

Snoop is commemorating the occasion with the release of *B.O.D.R.–Bacc on Death Row–*which will be his nineteenth studio album. The revitalized Death Row will also be getting into the world of NFTs, including some that will be released through a blockchain gaming company and contain exclusive Snoop tracks.

He had previously expressed interest in owning the label. In December he told GQ “I went looking for this job because I wanted to be the CEO of Death Row Records and basically take over the merchandise and rerelease their music, do documentaries, and possibly do my life story.” But then owners ended up snubbing Snoop in favour of the Blackstone Group. “The man in me was hurt, but the businessman in me said, Okay, I got to find something else to do to take this energy of mine that I’m holding on to,” Snoop said, alluding to his new position at Def Jam as an executive creative consultant.

But the relationship between Snoop and Death Row has had its share of ups and downs, too. After releasing his first two albums on the label, Snoop departed and signed with Master P’s No Limit in 1998, claiming that he was owed money. In the time since he was part of Death Row, Snoop has bounced around the industry, founding his own label, Doggy Style Records, releasing music through Pharrell’s Star Trak, and working with a string of independent distributors. Death Row founder Suge Knight received a 28-year prison sentence in 2018 after a fatal hit-and-run. Death Row has been sold multiple times since its heyday, most recently as part of the larger eOne Music purchase by financial firm Blackstone in April 2021.

That the news comes just a few days before Snoop is due to take the stage as part of a Los Angeles-based Super Bowl halftime show just makes the whole thing feel like more of a Hollywood ending.

SUPER HAPPY FOR HIM!