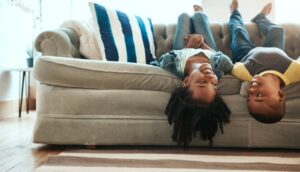 This is probably a skill that millennials had to teach themselves so that they could survive and please don’t pretend like you never did it to YOUR siblings if you had any.

Unless you were the youngest one in question, then this isn’t for you so please just move along.

If you’re a millennial and you had younger siblings, then you would know what it felt like to have your spotlight taken as soon as the younger sibling came into the picture (although I think this is something that happens to everyone who has younger brothers and sisters regardless of whether they’re a millennial or not)

When my younger sister was born, the title of “Only child and apple of everyone’s eyes” was taken from me. She became the It Girl and she didn’t even know it, but I did and that was enough.

Instead of sulking around about something that I couldn’t help, I decided to use that to my advantage by waiting for her to be old enough to talk so that I could send her to my parents for requests that I’d usually get rejected for.

The requests would range from small things like lollies and fast food to bigger things like a remote-controlled car and trips to game centers in town.

Sometimes it would work and sometimes it wouldn’t but there’s one thing I know and that is the fact that that trend is slowly dying out as kids these days have a bit easier compared to back then. All you have to do is give a kid a smartphone and they’re set for life.

I could be wrong so if you know that siblings still do this, let me know in the comments.

How to know if your partner is only “your” partner