Scotland overcame a rocky period in the first half to defeat our boys 28 – 12, in their first Autumn Test at Murrayfield.

The hosts looked set for a smooth afternoon when George Turner’s early try put them ahead, but the Fiji team – under the charge of former Scotland head coach Vern Cotter – hit back with two tries of their own and temporarily had the hosts on the ropes.

Touchdowns either side of the interval from Adam Hastings and Duhan van der Merwe helped Gregor Townsend’s side regain the upper hand, however, before replacement Ben White added a further score in the closing stages.

In just the second minute, Fiji suffered a setback when debutant Ratu Rotuisolia was sent to the sin-bin for foul play.

The hosts made the extra man count as they bossed the early stages and after a sustained period of pressure, Turner pushed his way over from a rolling maul in the seventh minute for the game’s opening try. Hastings – given his chance to stake a claim for the stand-off berth vacated by high-profile absentee Finn Russell – was successful with the conversion.

Our boys had a good chance to get their first points on the board in the 11th minute when they were awarded a penalty in front of the posts, but Setareki Tuicuvu sent his kick wastefully wide from.

Three minutes later, Tuicuvu made amends with a try on the right at the end of a lovely flowing Fijian attack. Once again the wing’s kicking was well off, though, as he fluffed his conversion attempt.

Fiji had gained the initiative, however, and Rotuisolia – back on after his early yellow card – gave them the lead when he touched down on the left in the 23rd minute. 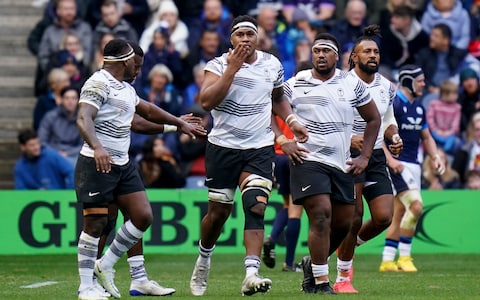 To add to Scotland’s woes, Stuart Hogg was sent to the sin-bin as a result of his team being persistently penalised. Vilimoni Botitu took over kicking duties and made no mistake with the conversion.

During Hogg’s time on the sidelines, the Scots were on the back foot and fortunate not to concede any more points as they somehow withstood some intense Fijian pressure.

They rediscovered their composure after the full-back returned to the fray to even up the numbers. In the last action of the first half, Hastings produced an impressive piece of skill to get himself free and touch down behind the posts after Ali Price had fed him following a scrum.

The try-scorer converted from close range to edge Scotland back in front at the break, much to the relief of the home crowd.

It proved to be Hastings’ last notable involvement in the game as he was forced off with a head knock two minutes into the second half, with Blair Kinghorn taking his place.

The Scots stretched their lead in the 49th minute when Van der Merwe received a looping pass from Chris Harris on the left and stepped away from two Fijians before touching down. 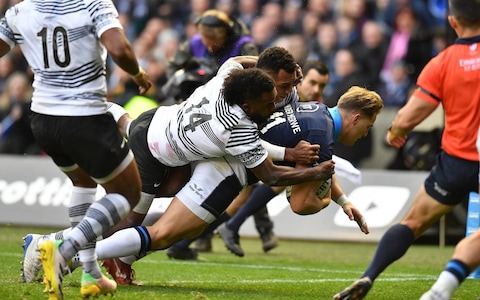 Kinghorn, who came under scrutiny after missing a last-gasp penalty in last weekend’s 16-15 defeat by Australia, kept his composure on this occasion to kick clinically between the posts from wide on the left.

Fiji’s Vinaya Habosi was sin-binned in the 61st minute for a high tackle on Scotland replacement Rory Sutherland.

Cameron Redpath thought he had scored in the 73rd minute, only for the try to be chalked off for a knock-on following a TMO review, although Fiji were penalised in the form of their third yellow card of the afternoon, which was shown to Livai Natave.

The Scots were able to celebrate their fourth try of the match just seconds later when White claimed possession from the back of the scrum and scurried over. Kinghorn added the extras.

Scotland wing Darcy Graham was yellow-carded in the last minute but his team had already done enough to secure victory.

We will faceoff against Ireland next Saturday.

Indonesia To Punish Sex Outside Marriage With Jail Time

Do you remember Beast Wars? A movie adaptation is about to drop

Dad with a “Fear of Santa Claus” gets Terrified Every Year