We all love Christmas and we all know it’s the time to be jolly and to be giving and someone that embodies this is non-other than Santa claus himself.

Although our modern Santa claus is an old man in a red suit, riding reindeers in the sky and living at the north pole, the inspiration for this character that we’ve all come to love is St. Nicolas of Myra.

For centuries, the location of the grave of St. Nicholas of Myra has been contested. Historical records have claimed that he was buried at the church that bears his name, but extensive searches of the grounds revealed nothing of substance. 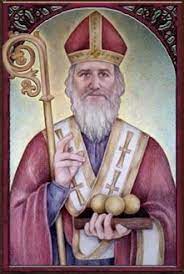 However, the head of Antalya’s Monument Authority, Cemil Karabayram, told a news outlet that he and his team had found a shrine beneath the floors of St. Nicholas Church, previously unseen due to the tiled floor’s intricate mosaic. He said that they found the shrine during a routine survey.

They uncovered what they believed to be a tomb, which may hold the remains of the real St. Nicholas. As for the man laid to rest in Italy? Some experts now say that those remains may belong to another person — and the grave once thought to hold St. Nicholas may have held someone else.

Though the discovery has yet to be proven via excavation, Karabayram is determined to follow through with the next step — even though it will be a long, tedious, and complicated process to complete.