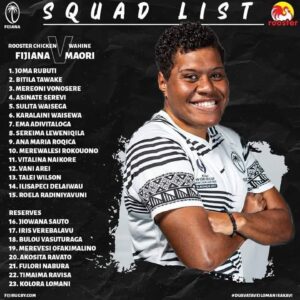 Rooster Chicken Fijiana 15s Captain Sereima Leweniqila says after almost a decade of playing she did not realise what the rewards were or where she would end up in until the night that she saw the World Cup Trophy.

Leweniqila says there are a couple of things that they have learnt from the Super W competition in terms of the game, things to do on and off the field as well as the importance of team bonding.

The Rooster Chicken Fijiana will play the New Zealand Wahine Maori at 6 pm this Friday at the HFC Bank Stadium.