His cellmate is 37 year old, Brendan Hunt, who was convicted of threatening to kill government officials.

He submitted the drawings to the Brooklyn Federal Court as part of his formal request to have his sentence be time-served. The detailed comics featured Hunt and Kelly meeting in a jail cell, and following their day-to-day activities of yoga, listening to music, working out and getting buff together. Welll…R Kelly has been busy huh 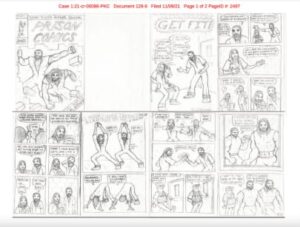 The funny part to me is the comic’s first slides. Hunt reveals he hasn’t heard any of his biggest hits. In which R Kelly replied ;

I’m the greatest R&B star in human history! How can you not know of R. Kelly?

From there, the duo in the comic become unlikely friends, a scenario that was slightly based on their real-life relationship. Hunt’s lawyers told The Daily News that the pair had “found a lot of common ground as musicians and artists” when they were locked up together for two weeks at the Metropolitan Detention Center. The comics were filed to the judge by Hunt’s lawyers to show their client’s creative ambitions, and to comment on the “lasting friendships” he made “with some of the most unlikely characters.”

Hunt was sent to prison in April after he made a video following the Jan. 6 Capitol riots that demanded the rioters return to Washington to “kill your senators.”

He made specific threats to Rep. Alexandria Ocasio-Cortez, House Speaker Nancy Pelosi, and Senate Majority Leader Chuck Schumer, though a judge ended up acquitting him of charges related to those threats.

Whatever it may be, I hope they stay best friends in that cell forever.