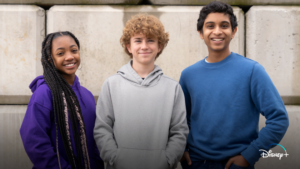 The new series will be featured on Disney+ and they have finally confirmed the three young actors that will be playing the three main protagonists.

Walker Scobell will be playing the titular character of Percy and if you didn’t already know, he was the one who played the younger version of Ryan Reynolds’ character in The Adam Project.

They’re all pretty much the right ages in real life to play each of these characters according to the books written by Rick Riordan so I’m pretty excited to see what the series will have in store for us.