The “Percy Jackson and the Olympians” series has officially been picked up at Disney Plus. 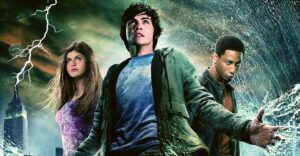 The Percy Jackson book series is comprised of “The Lightning Thief,” “The Sea of Monsters,” “The Titan’s Curse,” “The Battle of the Labyrinth,” and “The Last Olympian.” Riordan has also published the companion book “The Demigod Files” as well as “The Demigod Diaries.”

Both “Lightning Thief” and “Sea of Monsters” were previously adapted into feature films. Logan Lerman starred as Jackson. The first film was released in 2010 while the second was released in 2013. The two films received mixed reviews from critics but grossed over $425 million combined worldwide.

The series adaptation of the Rick Riordan book series was first reported as being in the works at the streamer back in May 2020. Casting is currently underway on the series. Riordan announced the series pick up in a video message, which can be viewed below.

Riordan and Jon Steinberg will write the pilot with James Bobin directing. Steinberg is currently under an overall deal with Disney’s 20th Television, while Bobin recently directed and executive produced Disney Plus’ “Mysterious Benedict Society” series and the film “Dora and the Lost City of Gold.”

The live-action “Percy Jackson” series tells the fantastical story of the titular 12-year-old modern demigod, who’s just coming to terms with his newfound supernatural powers when the sky god Zeus accuses him of stealing his master lightning bolt. Now Percy must trek across America to find it and restore order to Olympus.

“Bringing Rick Riordan’s brilliant Percy Jackson books to Disney Plus as a television series has been a mission for so many of us at this company as well as for Rick himself, and Jon, Dan, James and the excellent team they have assembled have proven to be the perfect collaborators,” said Karey Burke, president of 20th Television.

“Thanks to our friends at Disney Branded Television led by Ayo, and Disney Streaming led by Michael [Paull], this will be an adaptation for the ages, with all the excitement, action and mythology fans of the books expect and love.”