Her debut performance of “Butter” with BTS is no longer happening but ARMY’s around the world have come to an understanding.

This was after the rapper said she was forced to drop out due to “an unexpected personal matter.”

Megan made the announcement through her Twitter on Saturday to explain to fans why she could no longer attend the AMAs at the Microsoft Theater in Los Angeles. The ceremony was set to feature the first live performance of the remix version of “Butter” with BTS. Megan’s “Butter” remix with the K-pop group dropped over the summer after a legal battle with her record label 1501 Certified Entertainment. 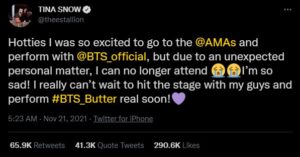 No specific reason was given for her planned absence.

Megan is nominated for three awards at this year’s ceremony — favorite female hip-hop artist, favorite hip-hop album for “Good News” and favorite trending song for “Body.” BTS is up for artist of the year, favorite pop duo and favorite pop song for “Butter.” Olivia Rodrigo leads the field with seven nominations, while The Weeknd follows with six. Other top nominees include Doja Cat and Giveon. The AMA ceremony will be hosted by Cardi B and feature a slate of performances from Rodrigo, Bad Bunny with Tiny and Julieta Venegas, Tyler The Creator and Carrie Underwood, among others.

The 2021 American Music Awards is happening as we speak, hosted by Cardi B.