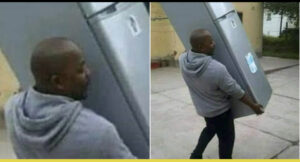 This man did exactly that.

While in a relationship with his girlfriend, this man (who will remain anonymous because we don’t know who he is lmao) bought his girlfriend a brand new fridge for her apartment thinking that it would be a nice touch to it since they were planning to move in together anyways.

After some time, he realized that his girlfriend had been acting strange and decided to trust his gut and find out for himself what exactly was the problem.

His suspicions were proven right when he found his girlfriend cheating on him with someone else.

Caught up in a storm of emotions, he went over to her apartment, emptied out the fridge that he had gifted her, literally picked up and walked away with it.

I mean, do you know how pissed off you have to just walk away carrying a fridge like that with you?

Let us know in the comments if you would’ve done the same thing or something else.