When residents of the eastern Chinese city of Hangzhou were recently given strict orders to remain indoors, the news actually had nothing to do with the ongoing coronavirus pandemic. Instead, there was a much different kind of threat facing locals: Three leopards had escaped from Hangzhou Safari Park, and they had been roaming around freely for weeks.

According to The Guardian, the terrifying lapse in security and park management occurred on April 19, 2021. It didn’t take long for locals to spot the dangerous predators skulking about the hillsides and sprinting across town.

But zoo officials denied any involvement in the incident until early May, fearing damage to ticket sales during China’s five-day Labor Day holiday at the beginning of the month. Hangzhou Safari Park is situated about 12 miles from the city’s downtown district, the upper range of what a typical wild leopard might travel in a single day.

Police discovered the animals ran off during an enclosure cleaning, with general manager Zhang Dequan ordering workers to keep quiet. 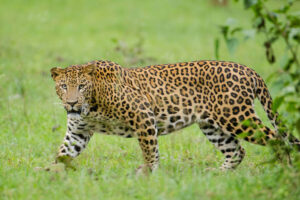