Laverne Cox has been honoured with her own Barbie. 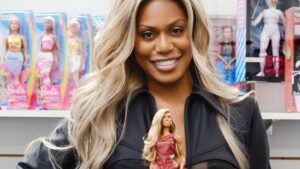 The new doll marks the first time Mattel has ever produced Barbie in the image of a transgender woman.

Laverne unveiled her Barbie during Wednesday’s episode of ‘Today’

I think this year particularly, when over 250 pieces of anti-transgender legislation have been introduced in state legislatures all over the country—targeting transgender children, LGBTQ youth. I hope all the kids who are feeling stigmatized— when their health care is being jeopardized, their ability to play in sports—I hope they can see this Barbie and have a sense of hope and possibility. If they don’t see themselves in this Barbie, I hope they know that they can create spaces where they do see themselves, where they are represented, because representation matters.

She said she became fond of Barbie as a child, but wasn’t allowed to play with them.

Cox’s Barbie is part of Mattel’s Tribute Collection and is available to purchase for $40 online. The doll is dressed in a red gown and silver bodysuit, as well as boots and silver earrings. Cox wore the same design during her Barbie-themed 50th birthday party earlier this week.

In celebration of Cox’s milestone birthday, Mattel announced it would make a donation to TransFamilySOS in the actress’ name.