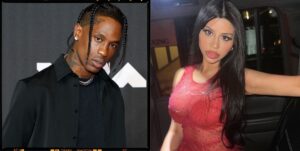 Just as the ex was serving out receipts, Travis immediately went on Instagram to shut down the rumours. His wife, followed suit with her somewhat shady post.

The makeup mogul posted an Instagram post that some fans deciphered that it was towards the other model.

In an Instagram post on October 25, 2022, she’s wearing what might be Travis’ underwear. One fan commented, “This shade is just getting messy. She now wearing his boxers to annoy the other girl? 😂” Though, other fans poked fun at the Kylie Cosmetics founder and her attire. Rumours of the AstroWorld artist started to circulate when Rojean Kar claimed that she met Travis on his music video set and revealed messages between the two on her Instagram. She also claimed that the AstroWorld artist “cheats on that bitch every single f–king night,” and that they spent Valentine’s Day together which was two weeks after their second child’s birth. After she posted the stories, the model changed her Instagram bio to “not a fit tea pusher. 🦠👩🏻‍🎓👩🏻‍⚕️” which is a direct jab at Kylie who is an avid ambassador for the brand. 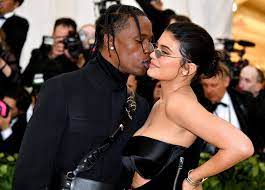 Meanwhile, Ms Jenner is out here, living life amid all this drama. If the rumours are true though, no one is safe. I mean, these celebs are getting cheated on, annnd then there’s us. Dannng!