KJ Apa has been bestowed with the Samoan chiefly title Sāvae.

The Kiwi-born actor best known for his lead role in Netflix’s ‘Riverdale’ is currently on a family holiday in Samoa, where he revealed a glimpse of the traditional ceremony in an Instagram post.

In the post, Sāvae KJ posted a photo from the ceremony, with a caption in both Samoan and English.

“My goal is to serve my family and my village (Moata’a) Thank you God.”

The ceremony was conducted by the chiefs of his village of Moata’a.

“It’s an amazing experience,” -Sāvae KJ Apa after the ceremony

According to Talamua, KJ is not the only famous name from the Moata’a village. 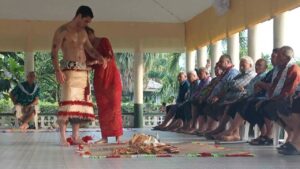 He shares the title with a close relative, former All Black Savae Sir La’auli Michael Jones. Jones is a former NZ rugby union player and coach who was named by Rugby World magazine as the third-best All-Black of the 20th century.

But in the acting category, Seiuli Dwayne Johnson travelled the same journey in the mid-80s to be bestowed a Samoan chiefly title.

KJ has always been proud of his Samoan heritage and New Zealand roots and this just solidifies his connection to home.