Justin Bieber announced on Friday that he is taking a break from performing because he is suffering from paralysis on one side of his face. 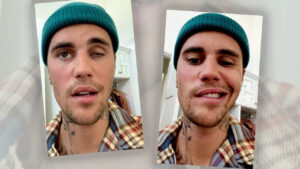 In a video that he uploaded onto his Instagram account, Justin explained that he has Ramsay Hunt syndrome, which has left him unable to move half of his face and unable to take the stage

“As you can see, this eye is not blinking, I can’t smile on this side of my face, this nostril will not move,” he said while gesturing to his right side.
“Can’t believe I’m saying this. I’ve done everything to get better but my sickness is getting worse,” he said.
“It’s going to be ok,,” he said. “I have hope, and I trust God.”
What is Ramsay Hunt Syndrome?
According to the Mayo Clinic, Ramsay Hunt syndrome “occurs when a shingles outbreak affects the facial nerve near one of your ears. In addition to the painful shingles rash, Ramsay Hunt syndrome can cause facial paralysis and hearing loss in the affected ear.” It is typically more common in adults over the age of 60.
Source: CNN