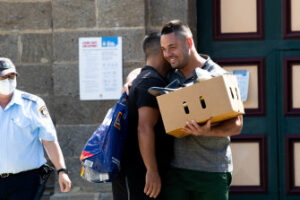 Nine months after he was jailed on rape charges, former NRL player Jarryd Hayne has been freed from prison with his convictions quashed.

The 33-year-old grinned and hugged a friend as he left Cooma Correctional Centre on Tuesday afternoon, carrying a cardboard box and a bag of personal effects.

Hours earlier a district court had granted him bail, a day after a NSW appeal court overturned his convictions and ordered a third trial.

Hayne appeared in the court via an audiovisual link on Tuesday morning, clad in prison greens, as the judge imposed conditions on his release.

He must pay a $20,000 bail surety within seven days, must surrender his passport, and report to police three times a week, in bail conditions agreed upon by his lawyer and the prosecutors.

He also must not contact the alleged victim or any witnesses, and cannot enter the Newcastle local government area.

Hayne was in May sentenced to five years and nine months behind bars – with a non-parole period of three years and eight months – after he was found guilty of two charges of sexual assault without consent.