Helmut Strebl is an Austrian bodybuilder and fitness model who is widely regarded as the most shredded man in the world because of his incredibly well-defined muscles. 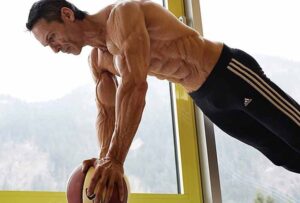 If you’re unfamiliar with fitness and bodybuilding, the name Helmut Strebl probably doesn’t ring a bell, but among fitness enthusiasts, he is famous as “the most shredded man in the world”. It’s an unofficial title, but looking at photos of his amazing human specimen, it’s hard to imagine anyone successfully challenging him for it. The guy is a walking anatomy model, with muscles so well-defined that you can practically see every fiber contracting under his skin.

Like, this guy should be in the Guinness Book of World Records!