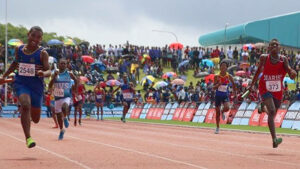 The song is called Qiri and it dropped this morning on the Crackfast show with Buenene and Drix at 7am and after hearing the song, we have to say that now we are even more excited for the Coke games now.

The song features Drix on the vocals and Ice Beats Fj & Monsieur Lix on the beats and I don’t think I can think of a better collaboration at this point after hearing the song for the first time.

You can check out the song on FM96 as we prep for the Coke Games next month.