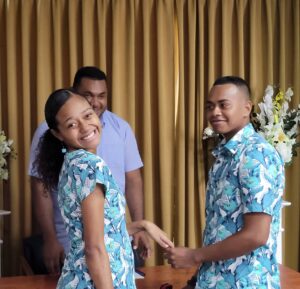 As you probably already know by now, the baby of the FM96 family, Esther, has tied the knot today in a very intimate civil union ceremony this morning.

She and her husband were joined by their witnesses, some of their family members, as well as Joey, Drix, Tammy, and Tifa.

Esther is considered to be the baby of the team even though she’s currently not the youngest member, but at one point she was and the name kind of just stuck with her from then til now.

She’s one of those team members that can easily get along with everybody and when she’s around, you’ll at least find yourself laughing once during one of her crazy stories.

Do you know how you always have that one person that you’d always want around during grog sessions or parties? Yeah, Esther is one of them saraga lol

Ironically, her husband is the same type of person in his own group of friends, so this is kind of like a match made in crazy Heaven.

Esther has been a part of this team for a good number of years and she’s been a part of our ups and downs so when we found out that she was tying the knot, we all felt both happy and nervous because even though she’s more than capable of being an amazing wife and mother, we were sad because we’ve basically known her ever since she legally became an adult and now it’s like we’re letting go of someone that we’ve helped raise lol

After everything she’s been through when it comes to relationships, we’re so happy that she has found someone who makes her happy, makes her laugh and makes her food in the morning when her baby bump starts craving things lmao

Congratulations again, Esther. We love you.