When we work towards success, we expect a lot of support and encouragement from our parents, especially our mothers.

After we reach our goal, our mother will always advice us to always do better, but in this case its not all rainbows and sunshine!

Slim Shady likes to diss people in his tracks, he once got under the skin of his own mother and she literally sued him for it. 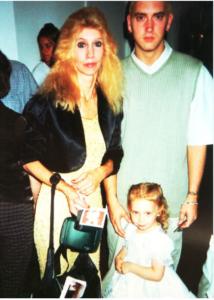 His mother attempted to sue the rapper for $10 million dollars (£7m) after claiming that he slandered her on the Slim Shady LP and other interviews.

Eminem, real name Marshall Mathers, first mentioned his mum on his 1999 single ‘My Name Is’, in which he claimed ‘my mom smokes more dope than I do’.

The rapper refers to his mum in his 2002 track, Cleaning Out My Closet

Witnessing your momma popping prescription pills in the kitchen / B****ing that someone’s always going through her purse and s***’s missing / Going through public housing systems, victim of Munchausen syndrome / My whole life I was made to believe I was sick when I wasn’t / Till I grew up, now I blew up, it makes you sick to ya stomach

His mother, Debbie didn’t agree with the lyrics and ended up filing a defamation lawsuit in 1999, claiming that the rapper was lying about his upbringing and slandering her.

I don’t know how to feel about this situation, its either he asked her for the money & he didn’t have the money but hey, he’s a celebrity!

So he probably just didn’t give it to her which is why his own mother sued him instead!!