An elephant in India killed a 70-year-old woman and then returned to her funeral to trample her corpse.

Reports said when family members gathered for the funeral and were in the middle of performing last rites, the same elephant appeared out of nowhere, lifted Ms Murmu’s body from the funeral pyre and trampled it again, as shocked mourners looked on.

The family were only able to go ahead with the ceremony after the elephant left. It remains unclear the animal’s intentions.

Conflicts between elephants and humans are a common occurrence in India. 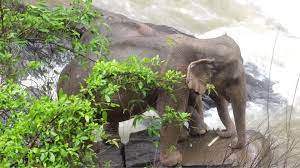 It’s safe to say that the Elephant didn’t really like this woman and wanted to make sure that she was really dead.