The Swire Shipping Fijian Drua have their second match this Saturday in the Australian Captial. Last week’s game is now in the rearview

The Drua are looking to be more accurate with the ball in hand when they take on the Brumbies in the Super Rugby Pacific this Saturday. Looking at the match statistics from last week’s game, the Drua had only one successful offload while the Waratahs had 5.

The team had a high rate of success when it came to turnovers compared to the Waratahs but only managed to score one try.

they have been working on capitalising on their game plan this week, such as being more accurate when they have the ball. He says they have now experienced the pace of the Super Rugby competition and are excited and looking forward to going again this weekend.

Other players that will start for the Drua are Tevita Ikanivere, Samuela Tawake, Kitione Salawa, Nemani Nagusa, Vinaya Habosi Onisi Ratave, Apisalome Vota and Baden Kerr. Caleb Muntz moves to the starting 15 for this weekend’s clash. 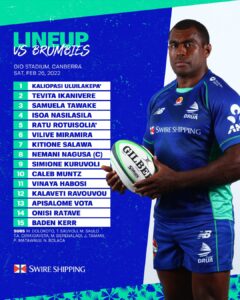 The Drua will meet the Brumbies at 3.35 pm Saturday. Toso Drua toso