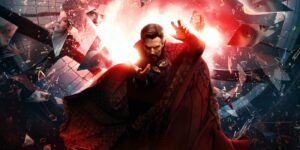 Do you know how hard it is to avoid movie spoilers in this day and age when we have the internet? PRETTY DANG HARD!!

Yesterday was the premiere of Dr Strange: Multiverse of Madness and I wasn’t able to go watch, but a lot of other people did and now I can’t scroll through the internet without the chance of coming across a spoiler.

Most people think that spoilers aren’t that much of a big deal, but if you’re a die hard Marvel fan and you’ve been waiting for a certain Marvel movie for a while, you’ll feel robbed of a special moment when someone reveals a spoiler to you, because the feeling that you experience when you witness that scene in person is super special.

It’s not just for superhero movies but movies in general.

There’s an unspoken rule where you have to give a 1 week period before you actually start talking about a movie to let everyone watch the movie first. After that one week is over, then it’s free for all. Not a lot of people are mindful of this unspoken rule, but most of us already know this and we try to practice it whenever we watch a movie as soon as it drops.

It’s not a fun thing walking on eggshells on the internet afraid of stumbling upon spoilers, but if you’re one of the gang who are keeping mum about the movie, thank you for your consideration. Twops ga o i’o!!!