When Amber Heard and Johnny Depp last faced off, at the High Court in London in July 2020, the actress was supported by her girlfriend, film producer Bianca Butti. The couple were pictured walking into court together most days from their suite at the Ham Yard Hotel. 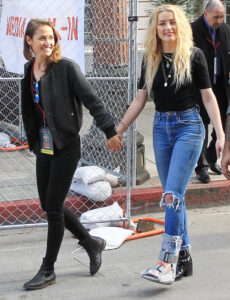 Since then, Butti has left the scene; and Heard has also welcomed the birth of a daughter, Oonagh, by surrogate. She said in court this week that she is ‘both the mom and the dad’ to the infant. However, it can be revealed that there is a new rock in her life, who may help to ease that burden: Scottish journalist Eve Barlow. Barlow, who lives in Los Angeles, has been spotted out and about with Heard and the baby, and friends say the pair have formed a strong bond during this difficult period.

One says: ‘Eve has been a huge support to Amber during the trial. She is an open person and has spoken proudly about their relationship.’

Barlow has been coming to support Heard in court most days, often sitting in the front benches along with her friend’s extended legal team during the case, which has been brought by Heard’s former husband Johnny Depp.

Barlow frequently tweets about Amber’s court ordeal, contending that the legal proceedings give Depp a chance to continue to ‘torture’ and ‘control’ his former wife

In one Tweet she wrote: ‘The horrible truth is that people love dead victims more than living ones. People are mad that Amber Heard survived.’

Barlow, who comes from Giffnock, a suburb of Glasgow, was the deputy editor of the NME (New Musical Express) and has many celebrity friends. After leaving the publication she started work as a freelance interviewer, speaking with celebrities including Taylor Swift.

She once described herself as a ‘zionist’ on Twitter, where she has 49,000 followers. In an article about antisemitism, published in Grazia magazine in 2015, she said that her great grandfather Gershwin Berelovitch left Russia in 1904 in search of a country of opportunity and tolerance. Her father, George, is a GP who was made an MBE for services to healthcare. But she wrote that she had gone to LA due to ‘Jew-bashing in the UK’.

Amber Heard and Johnny Depp are in court in Fairfax, Virginia, as a result of an article she wrote for the Washington Post in 2018, about the reaction to her speaking out about domestic abuse. Depp claims libel, and says the article caused him to lose his role as Jack Sparrow in the Pirates Of The Caribbean franchise. Heard is countersuing, saying that her former husband has carried out a global smear campaign against her.