As the gunman opened fire on a fourth-grade classroom at Robb Elementary earlier this week, 11-year-old Miah Cerillo put blood on herself and played dead, according to her aunt.

Blanca Rivera lives in Houston but has been in contact with her brother, Miah’s father, since the tragedy in Uvalde.

On the day of the shooting, Rivera spoke to ABC13 while her niece was at the hospital about five hours away being treated for the bullet fragments that hit her back.

As details emerged, she learned the lengths that the child went to survive.

As details emerged, she learned the lengths that the child went to survive. She did what she had to to survive… (she) pretended to be dead.

It is her understanding that the fourth-grade students switched between the two fourth-grade teachers’ classes and that the rooms were adjoined. She believes Miah’s teacher was Irma Garcia, who was killed.

As parents wondered where their children were in the midst of the chaos, telling reporters or posting online that they were missing, Miah told her father she knew where they were.

“She did say the kids were not missing,” Rivera said. “They were in her classroom.”

The days following the tragedy have been tough on the 11-year-old and her parents. Rivera said the elementary student has been physically ill and has had a hard time sleeping. She knows she will need therapy to cope with what she experienced.

Rivera explained to her children what happened to Miah on Tuesday night. She said her son cried during the moment of silence at school the next day thinking about how he could have lost his cousin.

Rivera’s daughter, Gabriela, who is also in the fourth grade, is close to Miah and they talk regularly. The child said she is sad about what happened and wants to talk to Miah but knows she needs space.

The more we learn about what these kids and parents went through, the more sick to our stomachs we get. 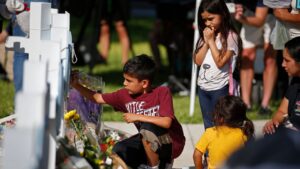